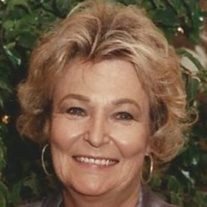 Ruth Haug, lovingly called Nellie Ruth, entered into eternal life with her Lord on January 13, 2014 in Owasso, Oklahoma. Ruth was born October 28, 1925 in Norman, Oklahoma to Tobias Price Cecil and Mary Jane Thompson Cecil. Ruth married Jesse Oren Haug, Jr., her one true love, on March 18, 1944. Only the war separated these two until Jesse preceded her in death in 2006. Ruth was the consummate mother who gave herself entirely to her children and husband’s welfare. She had a great passion for her family and loved having them near her. She was an expert seamstress, enjoyed painting, and loved to exercise her extraordinary shopping skills whenever a chance arose. Ruth always had a kind word for everyone and made each and every person she met feel special. She not only loved the people around her, but also had a kind and gentle way with her pets and “grandpets”. Ruth is survived by her three children; oldest son, Joseph Hagan and wife Lise of Stuart, Florida; daughter Linda Ward and husband Tony of Owasso, Oklahoma; and son Mike Haug and wife Betty, also of Owasso, Oklahoma. She is survived by seven grandchildren: Kimberly Boysel, Chris Condren, Kelley Condren, Nikki Long, Sara Burton, and Alex Hagan; and five great grandchildren; Kaitlin Boysel, Jack Boysel, Cianna Long, Jaide Long, and Rachel Condren. She is survived by one sister, Jewell Frances Yoder of Illinois. She was preceded in death by one brother, Price Cecil and one sister, Marion McNeeley. Ruth also has a host of extended family across the country who will miss her kind and gentle spirit in this world. Her legacy will be treasured by her family and friends who knew and loved her. Funeral services for Ruth Hazel Cecil Haug were arranged by Clifford D Garrett Family Funeral Home, Ft. Gibson, OK. The service will take place at 2 PM at the pavilion at the Ft. Gibson National Cemetery. Viewing will take place at the funeral home on January 16, 2014, 9 AM until 7PM. Honorary Casketbearers are: Joseph Hagan, Mike Haug, Tony Ward, John Boysel, Chris Condren, Kelley Condren, Jack Boysel, and Alex Hagan. For information about the services please call: 918-478-2555. The family has suggested that in lieu of flowers, donations to St. Jude Children’s Research Hospital or the Alzheimer’s Foundation of America would be appreciated.

The family of Ruth H. Haug (Cecil) created this Life Tributes page to make it easy to share your memories.