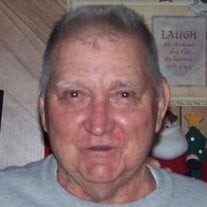 Ruvon “Ross” Thomas Hunter, 84, was born June 6, 1929 in Murphy OK to Marion and Marie (Rogers) Hunter and joined his Heavenly Father Friday, October 18, 2013 in Fort Gibson with his family by his side. Ross grew up and attended school in the Mayes County area and later began a career of traveling the open road as a long haul truck driver. Many weekends and holidays were spent camping and waterskiing with the family. Ross enjoyed riding his Harley Davidson motorcycle. He married Billie Jean Russum the love of his life with a union that lasted 46 years until her passing on February 16, 2009. Ross and Jean were avid bowlers and won numerous couple tournaments around the area. Football season was time spent in the “shop” also known as his man cave watching his favorite team the Oklahoma Sooners as evident of the OU flags proudly displayed on his truck. Always having an immaculate yard that looked like a golf course Ross was quick to pull out his lawn tractor and mow those few blades of grass that sprung up overnight. Later in life, Ross became quite the horticulturist, having a vast knowledge of flowers and plants and knowing their scientific names as well as their common name. Ross enlisted in the Army in 1947, completed his basic training and was sent to Yokuhama, Japan to await departure to Korea. During the waiting period he had medical complications and was sent back to the states and medically discharged. Ruvon leaves behind to cherish his memory, two sons; Ronald Hunter and wife Shelly, and Brad Hunter all of Fort Gibson, one daughter; Angela Hunter Martin and husband David of Fort Gibson, three brothers; Bill Hunter and wife Carolyn, Dale Hunter, and Tommy Hunter all of Muskogee, three sisters; Imogene Crittenden of Holdenville OK, Patsy Powell Hunter of Muskogee and Genivive Parson and husband Hoy of Webbers Falls, nine grandchildren; Candy, Kendra, Dylan, Cassidy, Kristen, Johnny, Gary, Cara-Dawn, Lindsay and 19 great grandchildren, and a host of extended family and friends. Ross was proceeded in death by his parents, his wife; Billie Jean Hunter and a son; Anthony Leonard Hunter, and a grandson; Ronald Hunter. A celebration of Ruvon’s life will be held Tuesday, October 22, 2013 at 2 P.M. at the Citizens Cemetery Pavilion in Fort Gibson with Chaplain Kevin Webster officiating. Rocky Kizzia, Tom O’Laughlin, Brian Hunter, Kevin Hunter, Jody Powell and Tommy Smith serving as casket bearers. The family of Ruvon “Ross” Thomas Hunter has entrusted his care, services and burial to Clifford D Garrett Family Funeral Home and Cremation Service 1224 E Poplar Fort Gibson, OK 74434, (918)478-2555. Online condolences may be left at clifforddgarrettfamilyfh.com

The family of Ruvon "Ross" T Hunter created this Life Tributes page to make it easy to share your memories.

Send flowers to the Hunter family.