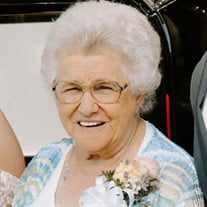 It is with heavy hearts we announce the passing of Bill “Squire” McGuire and his devoted wife of 64 years, Sandra Leigh “Sandy” McGuire. Bill left this world on December 25th and 22 hours later, Sandy followed his lead, as she always did. Bill was an only child born to W.E. and Nowasa McGuire on the 24th day of September 1933 and he is preceded in death by both his Mom and Dad, several Aunts, Uncles, and Cousins. Sandy, one of four children, was born to Francis Barto and Cleo Bernice McGeehon on the 9th day of July 1937. She too was preceded in death by her parents, her sister, Adah Kimbro of Muskogee, OK; brothers, Bobby of Richardson, TX; and Joe McGeehon also of Muskogee, OK. They leave behind their three girls, Kim Davidson and husband Luke of Fort Gibson, Kay Anderson and husband Mike of Muskogee, and Kelly Gauntt and late husband Scott of Fort Gibson. They have six grandchildren, Blake Anderson, Lindsey Frlekin, and Adam, Nick Gauntt and Sarah, Ryan Gauntt and Lindsey #3 Alexander, Whitney Llamas and Daniel, Larry Stern and Lindsey #2. They had 14 great grandchildren and one great great grandbaby. They also leave behind sister in laws, Martha McGeehon of Richardson, TX; and Billie McGeehon of Muskogee, OK. Also, Russ and Jeannie Kimbro of Muskogee, OK; Bart McGeehon, Patsy McGeehon, and Lori Cathey of all Fort Worth, TX; and many dear friends too numerous to mention, but you know who you are. Bill and Sandy met during the rock and rolling 50’s, after Bill fudged his age a bit, quit school, and to the surprise of his parents, enlisted in the Navy to serve his country during the Korean War. He saw the world during his tour of duty, but missed his home and family so much. He never left the United States again. After returning home, he went straight back to school as a promise to his Mother, where he found his future wife, Sandy McGeehon. They both graduated from the old Central High School together in 1956 and were married on July 27th of the same year. Bill worked in an upholstery shop and Sandy at Kresses Department Store. And so, began their lifelong love story. Bill was hired by the Muskogee Fire Department in 1956 and it became his life’s calling. Just saying he loved his job seemed like a disservice to him and all firefighters. Bill breathed this life as a firefighter, so Sandy made his dream hers also, and became an active member of the Firefighter’s Ladies Auxiliary. She took coffee, food, and whatever was needed to all large fires with their three young daughters in tow. It was a life the entire family lived. Saturdays were spent driving streets, pulling weeds, and repainting fire plugs to make water connections faster and easier. On his days off, like all firefighters, Bill had one or two extra jobs like Otasco, Jones Truck Lines, a wrecker driver, Thunderbird Speedway, partnership of Squire-Rosson Wheel Service, and also owned and operated a car lot for several years. He soon had his own 10-wheeler and 18-wheeler trucks working for Arkhola. Whatever job he has working, Bill always came home laughing and happy to be home again with Sandy and the girls. Bill and Sandy always had a hotrod or classic car of some kind either being built, rebuilt, spruced up, or ready for cruising! They loved to attend local car shows, attend Nascar Races, and having family cookouts. Their home in Fort Gibson was a popular hang out for everyone. Sandy worked at Gibson’s Pharmacy for a time, but she was always a homemaker first until the girls were in high school. Then, she was hired by Owen’s Brockway Glass and gave them 21 years of service. There she was an operator, packer, and filled in wherever she was needed. She retired from Brockway in 1977, but never retired from her job as wife, homemaker, and Mom. Sandy was most known for her cooking and entertaining! She was always taking food to someone or a family that just needed a little help or having huge family dinners. Their deaths were so close and timely as everything in their lives. They held hands between their chairs as each began the Covid cough just before Christmas. On top of their underlying medical problems, they didn’t have what was needed to win this battle. For the first time in many years, miles were put between them as they lie in separate hospital beds only worried for the other. 22 hours is all the time Bill had to wait on Sandy before reuniting with family and friends long passed. The family feels safe in the fact Bill was still there at the doorway talking his head off to everyone and waiting on Sandy who he knew would be close behind. They had fat little weenie dogs galore all waiting to greet them, so they could all walk through the pearly gates of Heaven together. In lieu of flowers, the family asks that you diligently hunt and purchase N95 masks. Number one, for yourself and then donate another N95 to as many firefighters, EMS workers, nurses, and/or doctors you have in your life. Covid is a real thing! Bill and Sandy would both share a large soapbox to get this message out to all who would listen if only they hadn’t lost their battle against Covid on December 25 and 26, 2020. Masks and social distancing are required at cemetery. A celebration of Squire and Sandy's life will be held 1:00PM on Monday, January 11, 2021 at the Fort Gibson National Cemetery in Fort Gibson, OK with Adam Frlekin officiating. The family of Bill “Squire” and Sandra Leigh McGuire have entrusted their care, cremation and services to Clifford D Garrett Family Funeral Home, Fort Gibson. 918-478-2555. Online condolences may be left at clifforddgarrettfamilyfh.com

The family of Sandy McGuire created this Life Tributes page to make it easy to share your memories.

It is with heavy hearts we announce the passing of Bill “Squire”...

Send flowers to the McGuire family.