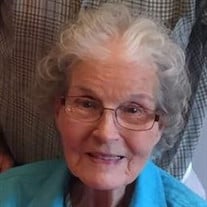 Sara Rebecca (Huggins) Preston was born on March 31,1933 to Ludy Angeline Huggins and James Wallace Huggins in Ft Gibson, Oklahoma and passed away Thursday, May 17, 2018 in San Antonio, Texas. She lived in Ft. Gibson and she married her high school sweetheart. Sara met her husband, John Ronald Preston, Sr. when they were both students at Ft. Gibson High School. According to family lore, when John saw Sara for the first time he turned to his friend and told him that she was the girl he was going to marry. At the time of her passing John and Sara had been married for 67 years! Sara is the proud mother of four children, Teresa Ray (Preston) Owens, John R. Preston, Jr.”Ron”, Lora Preston Lyman “Lolly” and Aaron Reser Preston. Sara was an active member of the Church of Jesus Christ of Latter-day Saints. After joining the LDS church Sara found a great passion for genealogy and family history. She became the family’s honorary historian. Because of her tenacious work much of the Preston, Huggins, and O'toole history has been discovered, saved, and passed down to the next generation. We will all be forever grateful to her for finding and preserving our stories. We are also grateful for her example of faith and for her love of the Savior, Jesus Christ. Sara was loved by everyone who knew her. She was as beautiful on the inside as she was on the outside. It can be safely said that there was never a person that didn’t love Sara when they met her. She was without guile. She was a peacemaker and embodied charity. She loved deeply and forgave freely. Sara was generous and she served others without hesitation. If someone was in need Sara was the first to help. She had a talent for working with people. While never receiving a diploma past High School Sara had a natural talent for typing and office organization. She was an executive secretary or office manager most of her secretarial career and she was appreciated and valued by her employers. When John began his own business in 1983 Sara became his partner and right-hand assistant. However, no matter what she did or what she accomplished if you asked her what her greatest achievement was she would, without hesitation, say that it was her family. Sara is survived by her husband John, her children, Ron and Aaron Preston and Lolly Lyman, siblings Warren Huggins, Laurel “Ann” Andrews, and Carol Tomlinson. Sara is the proud grandmother of 10 grandchildren, Matthew Owens, Daniel Owens, Kathryn (Preston) Gardner, Melissa Preston, J. Hansen Lyman, Tressa (Lyman) Rochester, Preston Lyman, Shayla (Lyman) Morales, Eliza Lyman and Robison Lyman. She is also survived by two great grandchildren, Fox Gardner and Adelia Rochester, as well numerous nieces, nephews, friends and family who are all feeling her absence at this time. She is preceded in death by her father and mother James and Ludy Huggins, a daughter, Teresa Preston Owens, and 5 siblings, Laurence Huggins, Clarence Huggins, George “Deanie” Huggins, Jack Huggins, and A.L.”Bud” Huggins as well as a great granddaughter Clara Gardner, all of whom we are sure are overjoyed to see her again. Funeral services will be held on Monday May 28, 2018 at The Church of Jesus Christ of Latter-day Saints located at 1315 E. 33rd St, Edmond, OK 73013. A public viewing will be held at the church before the funeral service from 9:30-10:30 AM. The funeral will begin at 11:00 AM. A viewing from 10:00-11:00 will be Tuesday, May 29, 2018 at Clifford D Garrett Family Funeral Home in Fort Gibson. A committal service will be held at 1:30PM Tuesday, May 29, 2018 at Citizens Cemetery in Fort Gibson. We invite all who loved Sara to join us in celebrating her life at either or both services. The family of Sara Rebecca (Huggins) Preston has entrusted her services and burial to Clifford D Garrett Family Funeral Home, Fort Gibson. 918-478-2555 Online condolences may be left at clifforddgarrettfamilyfh.com

Sara Rebecca (Huggins) Preston was born on March 31,1933 to Ludy Angeline Huggins and James Wallace Huggins in Ft Gibson, Oklahoma and passed away Thursday, May 17, 2018 in San Antonio, Texas. She lived in Ft. Gibson and she married her high... View Obituary & Service Information

The family of Sara Rebecca (Huggins) Preston created this Life Tributes page to make it easy to share your memories.