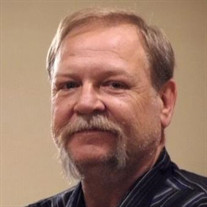 Scott Wayne Gauntt, 57, of Fort Gibson was born October 23, 1961 in Muskogee to Fred and Carol (Lentz) Gauntt and peacefully passed away Monday, June 17, 2019 with his loving family by his side. Scott received his formal education at Fort Gibson Public Schools, where he met and later married the love of his life, Kelly McGuire on September 25, 1981 in Fort Gibson. Scott grew up working at the Fort Gibson Sale Barn, which his family owned, with his brothers and sister. They would spend their weekends unloading trailers of livestock which had to be checked in and tagged prior to sale, all for $5 a day. After graduation he worked many construction jobs from building houses to working on the big stack at OG&E, then to Tubular Corporation where he later went to work for nearly 20 years. He later went to work at Woodworthy Cabinets Shop where he designed kitchen cabinets. But his time as an Aviation Technician for Davis Field Aviation was his true calling. He took pride in everything he did from working with wood and barn metal to building instrument panels for airplanes. He had a love for OU Football, especially with his lifelong best friend Mark Brawley, Nascar and any type of competitive racing spilling into becoming a competitor himself at Thunderbird Speedway. Scott enjoyed spending time at home working on his homestead, but always found time to go fishing, shooting pool with friends, listening to music and spending time with the grandkids. Scott had the best laugh and could light up the room with his personality. His legacy of love for his family and always doing the right thing will live on through his boys. He was preceded in death by his parents Fred and Carol Gauntt; brother, Freddy Gauntt; niece, Crystal Gauntt; and brother in law, James Staton. Scott is survived by his wife of 37 years, Kelly of the home; sons, Nick Gauntt and wife Sarah, Ryan Gauntt and Lindsey Alexander, and Larry Stern and wife Lindsey all of Fort Gibson; sister, Vickie Staton; Sister in law Joyce, brothers, Timmy Gauntt and wife Paula, Darryl Gauntt and wife Mecie; father and mother in law, Bill and Sandy McGuire; brother and sister in laws, Luke and Kim Davidson of Fort Gibson, Mike and Kay Anderson of Muskogee. Uncle and Aunts Jerry and Shirley Aldridge, Chip and Joyce O’Dell and Earlene Gauntt. Grandchildren, Brittany, Brandon and Brooklyn Gauntt, Brooklynn, Lane, Landon and Levi Stern; nieces and nephews, Chris Gauntt, Jennifer Arkison, Kelly Staton, Kim McLain, Khadney Payne, Bailey Goff, Darryn Gauntt, Andrea Gauntt, Blake Anderson, Whitney Llamas and Lindsey Frlekin and special friends Randy Jennings and Jesse Gonzalez. A visitation will be held Thursday, June 20, 2019 at Clifford D Garrett Family Funeral Home with family receiving friends from 5PM to 7PM. A service celebrating Scott’s life will be held 11AM Friday, June 21, 2019 at First Free Will Baptist Church, Fort Gibson with Pastor Adam Frlekin and Brother Tommy Honeycutt officiating Committal prayers and interment will follow in Citizens Cemetery in Fort Gibson with Nick Gauntt, Ryan Gauntt, Larry Stern, Darryl Gauntt, Timmy Gauntt and Mark Brawley serving as casket bearers. The family of Scott Wayne Gauntt has entrusted his care, services and burial to Clifford D Garrett Family Funeral Home, Fort Gibson. 918-478-2555 Online condolences may be left at clifforddgarrettfamilyfh.com

Scott Wayne Gauntt, 57, of Fort Gibson was born October 23, 1961 in Muskogee to Fred and Carol (Lentz) Gauntt and peacefully passed away Monday, June 17, 2019 with his loving family by his side. Scott received his formal education at Fort Gibson... View Obituary & Service Information

The family of Scott Wayne Gauntt created this Life Tributes page to make it easy to share your memories.

Send flowers to the Gauntt family.