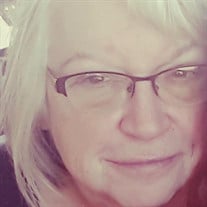 Sharon Jean Long, 69, of Fort Gibson was born in Muskogee on April 10, 1950 to John and Alma Lee (Green) Nichols and peacefully passed away Thursday, April 18, 2019 in Muskogee with her loving family by her side. She married the love of her life, David Long on April 8, 1967 in Fort Gibson, OK. To this union three daughters were born. Sharon was a school teacher for 29 years. She taught at Walt Whitman School in Tulsa for 11 years, 2 years at Hilldale School and 16 years at Okay Schools before retiring in 2017. She left a mark on everyone she met. Former students from years ago would come up and hug her. She was Mrs. Long as well as Nana, Mom, Daughter, Sister and Best friend. But above all of these, she was “Sunshine” to her husband Dave for over 52 years. Sharon had a big heart, but she couldn’t be pushed around. When she raised one eyebrow, you knew you’d had it. She took in others and forced us to love them as much as she did. It didn’t matter what you needed to talk about, you could always climb in her bed and let it all out. Sharon was preceded in death by her mother; Alma Lee Miller; and brother, Ricky Dean Nichols and many beloved family members. Those left to cherish her memory are her husband; David Long of the home; daughters, Angela Henson and husband David, Sheri Cartwright and Mike Leming, Traci Davis and husband Tim; father, John Nichols; sister, Janice Yandell and husband George; brother, Johnny Nichols and wife Kathy; grandchildren, Hali, Clayton, Tiffany Michelle, Lacey, Cody, Tiffany Nicole, Brooke, Joseph, Summer, Dustin, Wade and Macy; great grandchildren; Xavier, Zayne, Jaxen, Carter, Elijah, Jadyn, Zac, Skyla, Damien; and her little sidekick, Izaiah AKA “Pecko”; nieces, nephews and many friends. A Celebration of Sharon’s life will be 10AM Friday, April 26, 2019 at Clifford D Garrett Family Funeral Home Chapel in Fort Gibson with Pastor Marlene Rusnak officiating. Committal prayers and interment will follow in the Citizens Cemetery in Fort Gibson, OK with Dustin Melton officiating. Serving as casket bearers are Clayton David, Cody Long, Joseph Cardona, Dustin Melton, Wade Davis and Xavier David. The family of Sharon Jean Long has entrusted her care, services and burial to Clifford D Garrett Family Funeral Home, Fort Gibson, OK. Online condolences may be left at clifforddgarrettfamilyfh.com

Sharon Jean Long, 69, of Fort Gibson was born in Muskogee on April 10, 1950 to John and Alma Lee (Green) Nichols and peacefully passed away Thursday, April 18, 2019 in Muskogee with her loving family by her side. She married the love of her... View Obituary & Service Information

The family of Sharon Jean Long created this Life Tributes page to make it easy to share your memories.

Sharon Jean Long, 69, of Fort Gibson was born in Muskogee on...

Send flowers to the Long family.