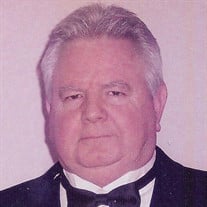 Silas Dean Dunn III, 67, of Muskogee, OK passed away in Tulsa, OK on Thursday, May 7, 2015 after a brief illness. Dean was born June 1, 1947 in Muskogee, OK to Silas Dean Dunn Jr. and Dora Nina (West) Dunn. Dean was a gifted athlete in his early years playing football in High School in the early 60’s as well as running track and field. After High School he joined the United States Army on October 25, 1966 and received an Honorable Discharge on November 13, 1968. He worked as a tile setter for Jim Beaver Tile Company until retiring due to illness. He loved nature and fishing for Crappie using his own hand made jigs that he was very proud of. He was a member of Southeast Baptist Church in Muskogee and loved gospel music and singing in his church choir. He married Brenda K. Johnson on April 3rd, 2004 and they had 6 beautiful years together until her passing on April 14, 2010. Dean was also preceded in death by his parents and a brother, John Dunn. He is survived by his son, Silas Dean Dunn IV of Muskogee, OK and his daughter, Amber Dunn of Fort Gibson, OK as well as his grandchildren who he adored, Nic, Maylynn, Aaron and Madison. Dean is also survived by his brothers Paul Dunn and wife Elaine of Indianapolis, IN, Tim Dunn and wife Maggie of Muskogee, OK and Michael Dunn and wife Shirley of Muskogee, OK, two sisters, Angie Roberts and husband Randy of Oktaha, OK and Annette Dunn of Dallas, TX and several nieces and nephews and a host of friends. Viewing will be 9:00 A.M. to 5:00 P.M. Tuesday, May 12, 2015 at the Clifford D Garrett Family Funeral Home in Fort Gibson, OK. Graveside services for Dean will be at 10:00 A.M. Wednesday, May 13, 2015 at Fort Gibson National Cemetery with Pastor Darren Wallace of Eastern Heights Baptist Church of Muskogee officiating. The family of Silas Dean Dunn III has entrusted his services and burial to Clifford D Garrett Family Funeral Home and Cremation Service 1224 E Poplar/PO Box 1973 Fort Gibson, OK. 918-478-2555. Online condolences may be left at clifforddgarrettfamilyfh.com

The family of Silas Dean Dunn III created this Life Tributes page to make it easy to share your memories.

Send flowers to the Dunn family.