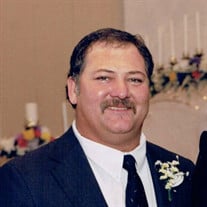 Stephen Edward Thornbrugh, 59, of Fort Gibson was born September 1, 1958 in Tulsa, OK to James W. and Jeannette (Dilley) Thornbrugh and peacefully passed away Tuesday, January 23, 2018 at his home with his family by his side. Steve grew up in the Morris (Okmulgee) area where he attended school. He married the love of his life Debra K Messer on February 14, 1976. Steve’s legacy is one of great love for his family which was evident in everything he did. Steve worked in the oil field most of his life. He was a true outdoorsman, having been a member of the K Bar C Hunting Club where deer camp would last the whole season. He was an avid fisherman, great cook, loved to golf and was considered the crew chief on his friend’s race cars. His gentle spirit and demeanor of always being there to help anyone in their time of need was his gift. His problem solving, fix anything attitude was how he approached life. He was a master at the lathe, making pens for gifts and all sorts of crafts for family and friends. He enjoyed traveling and took a trip of a lifetime to the Grand Canyon with his wife. Steve was preceded in death by his parents, James and Jeannette Thornbrugh. He is lovingly survived by his wife of 42 years, Debbie of the home; son, Mitchell Thornbrugh and wife Jana of Fort Gibson; daughters, April McClure of Tahlequah, Cassie Thornbrugh and companion Nick Perkins of Muskogee, and Linda Chilson (Honorary) of Norman; brothers, Kenneth Thornbrugh of Tulsa, Kevin Thornbrugh of Morris; granddaughters, Emerson Thornbrugh of Fort Gibson, Mattie and Jordyn McClure both of Tahlequah; grandsons, Tegan and Ryker Thornbrugh both of Fort Gibson and Tanner McClure of Tahlequah; and a host of nieces, nephews, family, and friends he loved dearly. A memorial service celebrating Steve’s life will be held 10:00AM Saturday, January 27, 2018 in the Fellowship Bible Church with Pastor Billy Parker officiating. Honorary pallbearers are Kevin Thornbrugh, Ross Jones, Troy Jones, Zack Jones, Les Williams, Braxton Williams, David Acuff, Darren Austin, Ted Williamson, Ricky White, Roger White, and Kevin Kinnamon. The family of Stephen Edward Thornbrugh has entrusted his cremation and services to Clifford D Garrett Family Funeral Home Fort Gibson, OK 918-478-2555. Online condolences may be left at clifforddgarrettfamilyfh.com

Stephen Edward Thornbrugh, 59, of Fort Gibson was born September 1, 1958 in Tulsa, OK to James W. and Jeannette (Dilley) Thornbrugh and peacefully passed away Tuesday, January 23, 2018 at his home with his family by his side. Steve grew up in... View Obituary & Service Information

The family of Stephen Edward Thornbrugh created this Life Tributes page to make it easy to share your memories.

Send flowers to the Thornbrugh family.