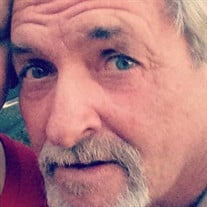 Terry Gene Rolland was born on April 9, 1957 in Muskogee, Oklahoma to Donald and Norma (Cunningham) Rolland. Terry departed this earth on Friday, October 18, 2019 in Tulsa, Oklahoma at the age of 62. Terry grew up in Fort Gibson, Oklahoma and spent his youth pranking his brothers and sisters, chasing cats into hayfields with a lit match, and riding the days away on his beloved horse, Old Red. In 1975, he married Deborah (Johnson) Rolland and had two daughters. Terry graduated from Fort Gibson High School in 1976 and began his career in the construction industry. He later changed his career path to truck driving, where he hauled diesel and gasoline across Oklahoma and Arkansas for more than 30 years, retiring from Shepherd Oil Company in 2019. He later moved to Beggs, Oklahoma and married Nancy (McCormack) Rolland. Terry spent many years volunteering in his community. He served as a volunteer firefighter for more than eight years, as well as a reserve police officer, in Beggs. Terry was a member of the Freemasonry, completing his Master Mason degree and earning him the title of a Shriner. Out of all his titles, his favorites were Dad & PaPa. He enjoyed teaching his daughters and grandchildren how to ride horses, ride bikes, mow the lawn, fish, and shoot a gun, instilling in them the value of hard work. Like his father and pappy before him, he taught them the art of practical jokes, teaching them to not take life too seriously and that laughter is the best medicine. Terry is survived by his daughters, Melisa Bockover and Lanna Gail Fry, both of Vian, OK; stepchildren, Chad McCormack of Okmulgee, OK and Amber Lawrence of Sapulpa, OK; grandchildren, Kenzie, Raylee, Rayden, Clarissa, Draven, Miracle, Ryder, Meghan, Kayla, and Logan; step-grandchildren, Gage, Nathan, Hailey, and Ryan; siblings, Diana Sparks and husband Jimmy, of Fort Gibson, OK, Pam Easton and husband David Holeman of Gore, OK, W. David Rolland of Fort Gibson, OK, Sammy Rolland and wife Malinda of Gore, OK, Tammy Williamson and husband Charles of Gore, OK, and Scott Rolland and friend Cindy Tackett of Muskogee, OK; numerous nieces, nephews, aunts, uncles, and cousins. Terry was preceded in death by his parents; wife, Nancy Rolland; grandson, Zachary Fry; brother, James Rolland; nephew, Christopher Rolland, and his best bud, Old Red. Terry’s family would like to thank the staff on 7 West at Saint Francis Health System for the support and care that was shown to Terry during his stay. Your kindness will not be forgotten. A celebration of Terry’s life will be held Tuesday, October 29, 2019 at 2pm at the First Baptist Church in Fort Gibson, OK with Dennis Casillas officiating. Urn bearers for Terry will be his nephews: Greg Sparks, Jared Sparks, James “Tooter” Lambert, Nathan Rolland and Keith Williamson. Honorary urn bearers will be his brothers: W. David Rolland, Sammy Rolland, Scott Rolland, Jimmy Sparks, David Holeman, and Charles Williamson. The family of Terry Gene Rolland has entrusted his cremation and service to Clifford D Garrett Family Funeral Home and Cremation Service, Fort Gibson. 918-478-2555. Online condolences may be left at clifforddgarrettfamilyfh.com

Terry Gene Rolland was born on April 9, 1957 in Muskogee, Oklahoma to Donald and Norma (Cunningham) Rolland. Terry departed this earth on Friday, October 18, 2019 in Tulsa, Oklahoma at the age of 62. Terry grew up in Fort Gibson, Oklahoma and... View Obituary & Service Information

The family of Terry G Rolland created this Life Tributes page to make it easy to share your memories.

Send flowers to the Rolland family.