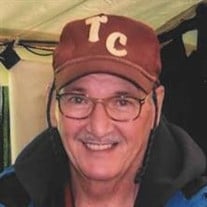 Tommy Duane Cookson, 77, of Fort Gibson was born on November 5, 1941 in Cookson, Oklahoma to Richard Howard Cookson and Lila Jewell (Blair) Cookson and passed away Saturday, August 24, 2019 in Tulsa, Oklahoma. Tommy lived in Tulsa, OK from the age of 2 years until he was 17 years old. He graduated from Tulsa Central High School May of 1959. Tommy enlisted in the United States Navy on August 25, 1959. His boot camp was spent at San Diego, California. He then attended Naval Air Technical Training in Philadelphia, PA. He served on the U.S.S. Hornet CVS-12 in Long Beach, California and the U.S.S. Constellation CVA-64 in San Diego, California. He was honorably discharged August 25, 1968 after serving 8 years 11 months and 11 days. He received several commendations, Good Conduct Award with One Star, National Defense Award, Navy Unit Citation with One Star, Vietnamese Service 1960-1968, and Vietnamese Campaign Ribbon with Three Stars. On February 23, 1961 he married Linda Jean Toner, to this marriage two children were born, Kelly Renea Cookson and Michael Duane Cookson. After serving with the US Navy he began working at Northeastern State University in Tahlequah, OK from November 1967 to March 1970. He began his truck driving career with B & B Truck Line from March 1968 to March 1975, then worked for Campbell “66” Express from March 1975 to March 1980 then worked for Yellow Freight Lines. Tommy started his Stain Glass Business April 1980 in Miami, OK. His passion in life was making stain glass which are spread all over the United States. He really enjoyed country music, reading and traveling all over the United States and Canada with his sister Mary. Tommy’s fondest memory was rebuilding his 1966 Chevelle. Tommy is survived by his son; Michael Cookson of Owasso, OK; sister, Mary Ellen (Cookson) Lee of Baxter Springs, Kansas and many friends. He was preceded in death by his parents; and daughter, Kelly Cookson. Viewing will be noon to 1:45PM Wednesday, August 28, 2019 at Clifford D Garrett Family Funeral Home in Fort Gibson. A Celebration of Tommy’s Life will be held 2:00PM Wednesday, August 28, 2019 at Fort Gibson National Cemetery. Full Military Honors will be observed. The family of Tommy Duane Cookson has entrusted his care, services and burial to Clifford D Garrett Family Funeral Home, Fort Gibson. 918-478-2555. Online condolences may be left at clifforddgarrettfamilyfh.com

The family of Tommy D Cookson created this Life Tributes page to make it easy to share your memories.

Tommy Duane Cookson, 77, of Fort Gibson was born on November...

Send flowers to the Cookson family.