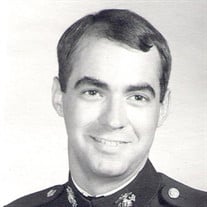 Tom D. Quinn was born in Atchison, Kansas July 17, 1950, the third son of Russell and Rosella Quinn and passed away Friday, November 5, 2021 at his home in Tulsa. In 1953, the family moved to Blackwell, Oklahoma where Tom lived until 1968, upon graduation from Blackwell High School, moving to Stillwater to attend Oklahoma State University. After graduation, Tom joined the United States Marine Corps and upon graduation from OCS, he was commissioned a 2nd Lieutenant Field Artillery. After completion of the Field Artillery Officer Basic Course in Fort Sill, Oklahoma, he was assigned to 29 Palms Marine Base, California. There he met his wife of forty some years, Lupe Dorado. From that union came three children, one son, Ryan Quinn and two daughters, Morgan and Erin. After being released from the Marine Corps, active duty, Tom and Lupe moved to Dallas where Tom was employed at the Acme Brick Company. His career in the brick business was cut short when he was offered a chance to be the publisher of the newspaper in Pawhuska for the Donrey Media Group. Tom spent the rest of his career with Donrey publishing several newspapers throughout the country, retiring in Tulsa where he made his home. Tom is preceded in death by his mother and father, Russ and Rosie Quinn; a brother, Jerry W. Quinn and a sister-in-law, Donna M. Quinn. He is survived by his wife, Lupe Quinn; son, Ryan Quinn; daughters, Morgan Quinn and Erin Quinn; a brother, Jim F. Quinn; a sister-in-law, Carol Purdy Quinn; two granddaughters, LuLu and Lena; several nieces, nephews and many friends. A memorial service for Tom will be held 10AM, Tuesday, November 16, 2021 at Clifford D Garrett Family Funeral Home Chapel in Fort Gibson with Mr. Ray Robinson officiating. Committal prayers and inurnment will follow at 11AM at Fort Gibson National Cemetery Pavilion with military honors being presented by the Frank Gladd American Legion Post #20 under the personal direction of Jim F. Quinn. The family of Tom D. Quinn has entrusted his service and inurnment to Clifford D Garrett Family Funeral Home, Fort Gibson. 918-478-2555.

Tom D. Quinn was born in Atchison, Kansas July 17, 1950, the third son of Russell and Rosella Quinn and passed away Friday, November 5, 2021 at his home in Tulsa. In 1953, the family moved to Blackwell, Oklahoma where Tom lived until 1968, upon... View Obituary & Service Information

The family of Tommy Dean Quinn created this Life Tributes page to make it easy to share your memories.

Send flowers to the Quinn family.