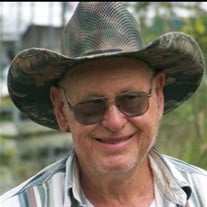 Troy “Chester” Rappe, 1934-2014 Chester, as everyone called him, was born to Wesley and Charlcie (Mannon) Rappe on May 11, 1934 in Fort Gibson, Oklahoma. He received his eternal reward on Thursday, July 10, 2014 surrounded by his family at his home in Okay, OK. Chester attended Muskogee Public Schools. He married his wife Martha “Louise” (Bolinger) Rappe on November 13, 1960 after only a nine day courtship. Meeting at Swift & Co., where they both worked, Chester and Louise were married over 53 years. Chester continued his career at Acme Engineering working as a welder until retirement. He proudly served his country in the United States Army, serving as a combat engineer stationed in Korea and Fort Lewis WA. and received an Honorable Discharge in 1958. Some of Chester's favorite pastimes were hunting, fishing, and camping. One rule when camping, tents only, campers were not allowed. Chester spent many hours in the woods hunting deer and would take Louise on occasion, the last time being when she started painting her fingernails while up in the tree stand. Needless to say it was a short deer hunting day. Chester tucked his kids into bed every night and would allow them a little time to talk, but when he spoke the words nene-nini-nunu, they knew it was time to go to sleep. Life lessons were learned without Chester ever raising his voice. He always had one of the best looking gardens in the county. Chester took great pride in his home and spent countless hours outside working on his landscape and keeping his property in perfect upkeep. No man had a greater love for music, Chester could often be found in his special room listening to Blue grass music and tapping his foot to the beat. He always loved the holidays and always made sure everyone had a great time. He went overboard in decorating his home inside and out. His family remembers fondly the special Halloween decorations and traditional hay ride for all ages. Chester had a great love for God and for his country, he was the ultimate patriot. He lead by example for his family, who will always admire him and follow in his footsteps. In his home is an entire wall dedicated to his affection for our Lord, with many crosses on display. Chester and Louise are members of the First Baptist Church in Okay. Chester was preceded in death by his parents, his twin brother Roy Lester Rappe, his sister Betty Rogers, his daughter Brenda Frazier, his grandson Billy Dean Lee Jr., and his nephew Keith Washington. Those left here to cherish his memory are his wife Louise (Bolinger) Rappe of the home; daughter, Carol Strebel and husband David; son,Troy Rappe and wife Carla; son-in-law, Verlin Frazier; grandchildren, Verlin Jr, Chester William, Sheri Frazier, Amanda Grimes and fiancé Jeff Eubanks, Audra Moore and husband Michael, Taylor Lee and wife Trina, Robyn, Abigail, and Grace Rappe; one great grandchild Martha Louise Lee, and his beloved dogs, Sassy Sue, Shirley, White Dog, and Maggie. A visitation will be held Sunday, July 13, 2014 with the family receiving friends from 3:00 PM to 5:00 PM at Clifford D Garrett Family Funeral Home in Fort Gibson. A celebration of Chester’s life will be held Monday, July 14, 2014 at 10:00 AM at First Baptist Church in Okay with Reverend Ken Krepps officiating. Interment will follow at Fort Gibson National Cemetery with Troy Rappe, Michael Moore, Jeff Eubanks, Patrick Carter, Thomas Jones, and Ray Dodgin serving as casket bearers. The family of Troy “Chester” Rappe has entrusted his services and burial to Clifford D Garrett Family Funeral Home 1224 E Poplar Fort Gibson, OK 74434 (918) 478-2555. Online condolences may be made at clifforddgarrettfamilyfh.com.

The family of Troy Chester Rappe created this Life Tributes page to make it easy to share your memories.

Chester, as everyone called...

Send flowers to the Rappe family.