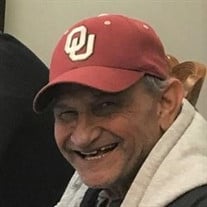 Virgil Lynn Holloway was born January, 16, 1952 in Shawnee Oklahoma to Virgil Holloway and Thelma Louise Holloway. He was a blessing to his family and the first and only son. He was raised in Seminole until the age of four. In Seminole they... View Obituary & Service Information

The family of Virgil "Lynn" Holloway created this Life Tributes page to make it easy to share your memories.

Send flowers to the Holloway family.