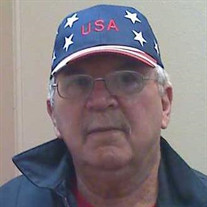 William “K” Gilleland, 77, was born December 28, 1937 in Taft, Texas to John William and Zell Alfreda (Perkins) Gilleland and passed away peacefully Wednesday, June 24, 2015 at Jack C. Montgomery Veteran’s Medical Center in Muskogee. William was known as “K” a nickname he gave himself at an early age. “K” graduated from Corpus Christi High School and attended college. He joined the United States Army in April 1958 and received an honorable discharge in January 1964. William moved to Fort Gibson and opened his own business, Fort Auto Supply. He had many friends who would visit him at the store, he never met a stranger. After closing, he started his career at Whitlock Packaging retiring in 2005. William loved to fish, and go four wheeling with family and friends. Many hours of going to the races and watching Nascar on Sunday with his boys, was some of his best times. “K” was the most kind, generous and helpful man a person could have ever met. He was always there to guide his family through the tough times, never judging, but always supportive. “Why hello” was his unique way of greeting you. He was known to be a man of integrity and high moral values. William was preceded in death by his parents. William leaves behind to cherish his memory, two sons; Lonnie Gilleland and his wife Tracye of Fort Gibson, Douglas Gilleland and his wife Erin of Okay, grandchildren; Matt and Mariah Gilleland of Muskogee, Randy and Toni Gilleland of Siloam Springs, AR, Laura Kinser of Norman, Jake and Jasmine Young of Fort Gibson, Lonnie II and Lacey Gilleland of Muskogee, William “Derek” Gilleland of Muskogee, and Spencer and Charlie Disney of Fort Gibson, nine great grandchildren, and a sister; Ruth and husband Jack Ashmoore of Paris, TX, along with many friends. In lieu of flowers, donations may be made in William’s name to the American Legion Post 20, P.O. Box 1401, Fort Gibson, OK. 74434 A visitation will be held Monday, June 29, 2015 with the family receiving friends from 5PM -7PM at Clifford D Garrett Family Funeral Home in Fort Gibson. Graveside services will be held at 10:00 A.M. Tuesday, June 30, 2015 at Fort Gibson National Cemetery with Pastor Don Rhyne officiating. William’s grandchildren will serve as honorary casket bearers. The family of William K. Gilleland has entrusted his services and burial to Clifford D. Garrett Family Funeral Home and Cremation Service, 1224 E. Poplar/P.O. Box 1973 Fort Gibson, OK 74434. (918) 478-2555. Online condolences may be left at clifforddgarrettfamilyfh.com

The family of William "K" Knight Gilleland created this Life Tributes page to make it easy to share your memories.

Send flowers to the Gilleland family.