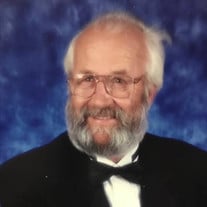 William Donald Rector, 84, passed away March 23, 2020. He was born June 19, 1935 in Muskogee, Oklahoma to Roy and Dovie Rector. Bill attended Muskogee Public Schools through eighth grade. He was in the Navy, August 1954 through July 1958. He served on a battleship during the Korean War. He met the love of his life Betty Anne and they wed in 1972. They enjoyed 45 years of marriage before her death in 2017. Bill was a loyal member of Ash Street Baptist Church. The greatest day of his life was when he was baptized. Working was his passion; he never stopped until the day he died. He was always looking for the next “Big Deal.” He was known for his sense of humor and many stories. Bill was preceded in death by his parents; wife, Betty Anne; sisters, Dorothy Bennett and Reba Smith; brothers, Athen Rector and Hugh Rector; cousin, Joe Rector and step children; Tracy Thomas and Lana Williams. He is survived by his sons; Steve and wife Vicky of Dripping Springs, TX, Jim Rector and wife, Elizabeth of Broken Arrow; daughters, Monta Wakefield with Ron Bailey, and Alexa Brown of Greenwood, AR, Cathy Gatewood and husband Jim of Garland, TX; daughter by heart, Leah Blair and husband Phillip of Fort Gibson, OK, and numerous grandkids, great grandkids, cousins, nieces, nephews and many friends. A family conducted memorial service will be held 10AM Friday, July 3, 2020 at Fort Gibson National Cemetery in Fort Gibson, Oklahoma with a Celebration of Bill’s life immediately following at 11AM at Ash Street Baptist Church, 1521 Ash Street, Muskogee, OK. The family of William Donald Rector has entrusted his cremation to Clifford D Garrett Family Funeral Home, Fort Gibson, Oklahoma. 918-478-2555. Online condolences may be left at clifforddgarrettfamilyfh

William Donald Rector, 84, passed away March 23, 2020. He was born June 19, 1935 in Muskogee, Oklahoma to Roy and Dovie Rector. Bill attended Muskogee Public Schools through eighth grade. He was in the Navy, August 1954 through July 1958. He... View Obituary & Service Information

The family of William Donald Rector created this Life Tributes page to make it easy to share your memories.

Send flowers to the Rector family.