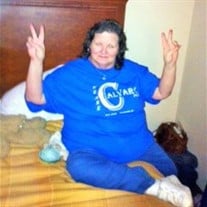 Wilma Faye (Mayo) Sherbourne, 58, of Fort Gibson, Oklahoma was called home to be with her Lord and Savior on Tuesday, May 20, 2014. She was born on October 22, 1955 in Muskogee, Oklahoma to George and Ora Bea (Nail) Mayo, the third child to this union and at the age of 16 became a mother figure to her six younger siblings when their Mom passed away, giving her the most important role as a homemaker for which she embraced over forty years. On January 31, 1979, Wilma married the love of her life, Randy Sherbourne and to this union one son was born. She enjoyed family gatherings and going to Church when she could. Wilma loved to teach about the word of God. Wilma was given many names from Nanny, Nenne and Mom and they were all very deserving. Wilma was preceded in death by her parents, nephews; Daryl Emerson and Ronald (Tiger) Mayo, her father and mother in law; Gene and Ava Sherbourne. Wilma leaves behind to cherish her memory, her husband; Randy of the home, son; Christopher and wife Kristene, three ornery but loved grandchildren; Beau, Ava and Guner Sherbourne all of Fort Gibson, Oklahoma and many others that called her Nanny. She also is survived by four brothers; George Mayo Jr., Ronald Mayo and friend Debbie Cole, Donald Mayo and wife Judy, and Glenn Mayo, three sisters; Pat Sherbourne and husband Steve, Sally Mayo all of Fort Gibson, Oklahoma, Vickie Tackett and husband Gerald of Muskogee, Oklahoma many nieces, nephews, greats and grands that will miss her. Wilma’s family would like to give a special thank-you to Todd and Marina Turner and the Calvary PCG family for all the prayers and support along with Dr. Scott Lilly, Good Shepard and all our adopted family at Hometown Hospice for the love they gave and shared with our family for our Wife, Mother, and Sister for Nanny’s last journey. A visitation will be held Thursday, May 22, 2014 at Clifford D Garrett Family Funeral Home in Fort Gibson with the family receiving friends from 5PM-7PM. A funeral service celebrating Wilma’s life will be held 10:00 AM Friday, May 23, 2014 at the First Baptist Church Fort Gibson with Pastor Todd Turner officiating. Interment will follow at Three Rivers Cemetery with Randy Sherbourne, Chris Sherbourne, Steve Sherbourne, Don Mayo, Ron Mayo and Glenn Mayo serving as casket bearers. Honorary casket bearers are George Mayo Jr., Larry Sherbourne, Gerald Tackett, Anthony Mayo, Beau Sherbourne and Gary Emerson. The Family of Wilma Faye Sherbourne have entrusted her services and burial to Clifford D Garrett Family Funeral Home 1224 E Poplar/PO Box 1973 Fort Gibson, Oklahoma. 918-478-2555. Online condolences may be made @ clifforddgarrettfamilyfh.com.

Wilma Faye (Mayo) Sherbourne, 58, of Fort Gibson, Oklahoma was called home to be with her Lord and Savior on Tuesday, May 20, 2014. She was born on October 22, 1955 in Muskogee, Oklahoma to George and Ora Bea (Nail) Mayo, the third child to... View Obituary & Service Information

The family of Wilma Faye Sherbourne created this Life Tributes page to make it easy to share your memories.

Send flowers to the Sherbourne family.