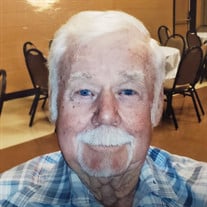 Womaluke Lonzoe Cox, 88, of Porum, OK was born June 25, 1931 in Porum, OK to Garland and Lucille (Whitley) Gray and passed away Sunday, September 15, 2019 at the Jack C. Montgomery Veteran’s Hospital in Muskogee with his loving family by his side. On April 16, 1952 Womaluke enlisted in the United State Marine Corp. He received the Korean Service Medal, UN Service Medal and National Defense Service Medal. After serving time with the Marines he enlisted in the United States Army on June 18, 1957 where he received the Sharpshooter Award for Rifle and Carbine and Good Conduct Award. In 1980 after serving he continued his education by going to the Eastern Oklahoma State College in Wilburton, OK. He then began his career with the Ammunition Plant in McAlester, OK. He was a faithful member of the Friendship Baptist Church in Porum, OK and a member of the Masonic Lodge #351 in Porum, OK, Webbers Falls, OK, Welletka, OK, McAlester, OK and Checotah, OK. Womaluke is preceded in death by his parents; Lucille and Garland Gray; sons, Dwayne Adams and Gary Adams; and mother in law, Aolia Pryor. Those left to cherish his memory are his wife; Elaine of the home; son, Kenneth Cox of McAlester, OK; daughter, Sherry Long and husband Kent of Porum, OK; sisters, Dorothy Breedlove of Porum, OK, Betty Defor and husband Ray of Muskogee; many beloved grandchildren and great grandchildren; many nieces, nephews and a host of friends. A memorial service celebrating Womaluke’s life will be held at noon, Friday, September 20, 2019 at Friendship Baptist Church, Porum, OK. with Pastor Jim Ray officiating. Masonic Rights will be observed. Committal prayers and inurnment will be 10:00AM Monday, September 23, 2019 at the Fort Gibson National Cemetery Pavilion in Fort Gibson, Oklahoma. Full Military Honors will be observed. The family of Womaluke Lonzoe Cox has entrusted his cremation to Clifford D Garrett Family Funeral Home, Fort Gibson. 918-478-2555 Online condolences may be left at clifforddgarrettfamilyfh.com

Womaluke Lonzoe Cox, 88, of Porum, OK was born June 25, 1931 in Porum, OK to Garland and Lucille (Whitley) Gray and passed away Sunday, September 15, 2019 at the Jack C. Montgomery Veteran&#8217;s Hospital in Muskogee with his loving family... View Obituary & Service Information

The family of Womaluke Lonzoe Cox created this Life Tributes page to make it easy to share your memories.

Send flowers to the Cox family.